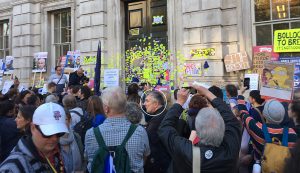 The London Demo on March 23rd is currently top priority – the movement depends on a large turnout to maintain impetus. The target of equalling or bettering the turnout on October 20th last year is reachable – and we will be there as we were four months ago – my head is visible in the crowd outside the Cabinet Office in Whitehall. (Thanks to Neena for the photo)

However by the 14th March the so called “meaningful vote” will set the scene for the March 29th deadline for Leaving the EU. The outcome could give the chance of moving the deadline back to allow a People’s Vote – or for May to get her deal approved by the MPs. May will however need an extension, but she wants only a short one to pass the required laws. The battle then would be to extend the deadline long enough to have a People’s Vote – in reality a Third Referendum.

The London  Grassroots Meeting on 2nd march unanimously passed a motion from North and South Staffs to make this happen – but this can only be done if the MPs pass it and in particular if the Cooper Boles Amendment passes. Key MPs especially Labour MPs who voted to stop this last month must be persuaded to change their votes.  A no deal outcome is unacceptable, and if May’s deal is voted down then an extension of the Article 50 Deadline and a People’s Vote on all the options becomes essential

The Kyle Wilson amendment currently being considered by Labour proposed allowing the Deal to pass in exchange for a People’s Vote – whether this is a good idea is debatable, but it can only be supported if cancelling Brexit is one of the main options in a People’s Vote. A vote just for or against May’s Deal is a non starter.

This is a time of great uncertainty. The only certainty is that a big demonstration on March 23rd is vital and must be achieved.